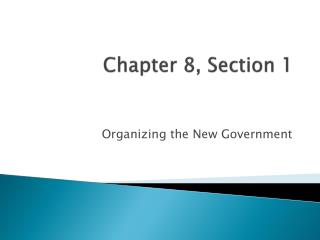 Chapter 8, Section 1. Organizing the New Government. Setting an Example. Precedent : an act or decision that sets an example for others to follow During his 2 terms in office Washington set many precedents 1796 he decided not to run for a third term Chapter 8 – Section 1 - . the pressure to expand. 1. what is imperialism and where was it happening? 2. what were five

Chapter 8 Section 1 - . distributions of the sample mean. learning objectives understand the concept of a sampling

Psychology Chapter 8 Section 1 - . what is thinking?. thinking is the mental activity that is involved in the

Chapter 8 Plants: Section 1 - . by mrs. t. your feet are permanently encased in a block of concrete. you can not move

Chapter 8, Section 1: Genetics - . inheriting traits. an organism is a collection of traits, all inherited from its