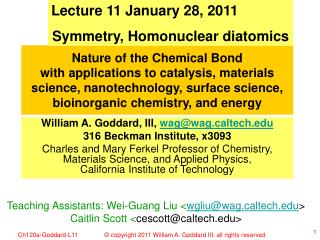 Lecture 12 January 31, 2011 Symmetry, Homonuclear diatomics - . nature of the chemical bond with applications to

Lecture 28 Point-group symmetry I - . molecular symmetry. a typical conversation between chemists … symmetry is the “

26-28 January 2011 - . presidential state of the union address. option: if you have headphones you may listen to the