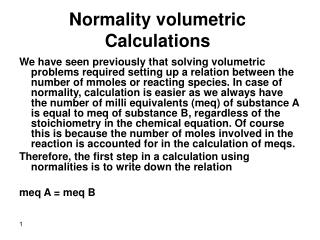 Volumetric Analysis Calculations - . example one:. jo has a solution of hydrochloric acid (hcl) that she does not know

Reliability Normality - Reliability test. reliabillity. a reliability analysis is used to measure: ? the extent to which

Assessing Normality - . are my data normally distributed?. evidence for normality. mean and median should not be too

Testing Normality - . many test procedures that we have developed rely on the assumption of normality. there are many

Volumetric Analysis - . volumetric analysis. it is a general term for a method in quantitative chemical analysis in which

Volumetric analysis - . a very useful method of chemical analysis is based upon determining the volume of a solution of

Volumetric Analysis - . frequently, we will react 2 solutions with each other these reactions are called titrations: