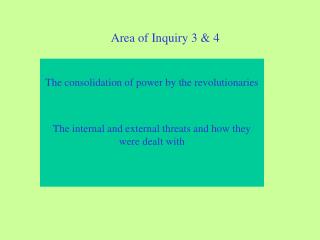 Area of Inquiry 3 & 4. The consolidation of power by the revolutionaries The internal and external threats and how they were dealt with. The Dual Authority: Feb 1917 – October 1917 Was the Provisional Government fatally weakened from the outset?. “WHY EUROPE” INQUIRY - . why was it europe, and not anyone else who explored and conquered the rest of the world?.

Area of Irregular Shapes - . objectives: i can calculate the area of irregular shapes. i can find the area of shapes that

ELI and the Iowa Core Curriculum - . what you really need to know!. developed by the gpaea eli team. objectives.

Inquiry Lesson – 1928 to 1932: Trials and Tribulations during Hoover’s Administration - Farmers, the dust bowl, and

The Power of Appreciative Inquiry Solving Problems by Looking at What's Going Right - . &amp; it possible use for the

Inquiry into effective teaching with one hand tied behind your back - . 22 november 2006 ubc institute for the