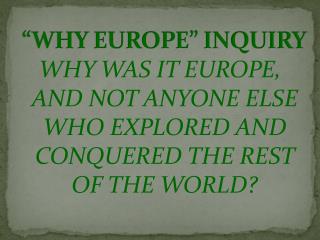 “WHY EUROPE” INQUIRY. WHY WAS IT EUROPE, AND NOT ANYONE ELSE WHO EXPLORED AND CONQUERED THE REST OF THE WORLD?. WHAT ARE WE GOING TO DO?. NeSA- INQUIRY, THE NATURE OF SCIENCE, AND TECHNOLOGY Abilities to do Scientific Inquiry - . sc 12.1.1 students will

Scientific Inquiry &amp; Problem Solving - . kimberly davis forensics. bell-ringer activity. pick up one of each of

THIS - . is. jeopardy. host at bellbrook jr. high. your. with. process standards jeopardy. ways of know-a. ways of