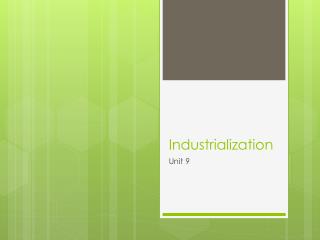 Industrialization. Unit 9. Warm-up: . Continue working on your “newspaper” article from yesterday. Directions are on the board. Yes, this will be taken up. . Industrial Revolution - . The transformation from agriculture to an industrial nation. . Brain Pop!!!! . http://www.brainpop.com /.

Industrialization - . unit 2. questions:. how did you feel after the “assembly line” activity? what problems do you