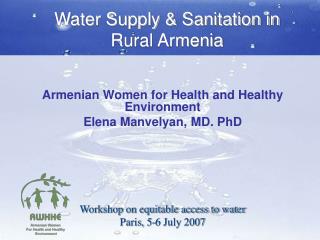 The Framework of the National Rural Water Supply and Sanitation Programme - . presentation to the. advocacy and

Water and Sanitation for All in emergency operations - . oslo conference hazel jones may 2011. water and sanitation

Scaling up rural sanitation in Vietnam - . experiences with a problem-driven approach to the political economy of water

Bangladesh - . p oor sanitation in bangladesh . statistics . is one of the poorest countries most densely populated