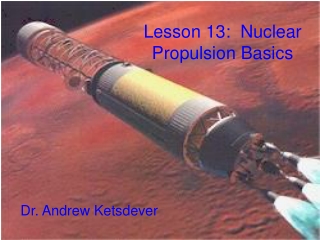 AME 436 Energy and Propulsion - . lecture 4 basics of combustion. outline. why do we need to study combustion? types of

Nuclear Engineering - . why is this field legit?. well, for one, who wouldn't want to harness the power of nuclear

Propulsion Systems - . propulsion system. a machine that produces thrust to push an object forward the amount of thrust

ATK Human-Rated Propulsion Summary - Atk is the only solid propulsion supplier that has been on all u.s. human-rated

Team A Propulsion - . 1/16/01. presentation outline. chemical propulsion: expansion of gases as a result of chemical

Nuclear Radius - . nuclear physics lesson 11. homework . research and explain how electron diffraction can be used to