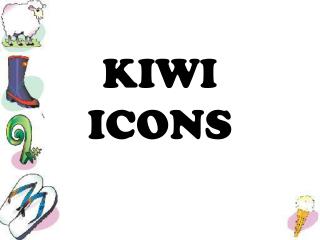 KIWI ICONS. PETER JACKSON. Born 31 October 1961. Gained international recognition after making 3 films based on JRR Tolkien's Lord of the Rings books. Was made a Companion of The New Zealand Order of Merit (CNZM) for his services to the film industry in the 2002. NEIL FINN. KIWI!!! - . identity and sport in new zealand society. identity. “identity is the perception of self, shaped by social

Kooky Kiwi - . put your thinking cap on! there will be questions to answer at the end. a slice of kiwi history. kiwi is

KIWI BIRDS - . where do kiwi birds come from?. kiwi are endemic to the island country of new zealand. . why are kiwi

Kiwi Identity - . flags, anthems and coat of arms. challenge: draw the new zealand flag from memory!. how did you do?.

Frames Icons - . press f5 to start presentation. over time means. over time. issues of importance past, present and