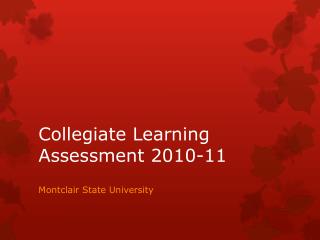 2010-11 ASSESSMENT TOOLS - . the following will be used as assessment tools: a. employment/involvement self assessment b.

2010-11 ASSESSMENT TOOLS - . the following will be used as assessment tools: a. employment/involvement self

Using The Collegiate Learning Assessment: Impressions and Advice - . presentation to the association of institutional

THE [ CLA ] IS MY FRIEND [ Collegiate Learning Assessment ] SEPT. 2009 - . outline brief overview of the cla our results

District Assessment Training for 2010-11 - . good morning! thank you for all you do and will be asked to do! please have

COLLEGIATE - . texas. where are the chapters?. 60% reduction in chapters significant reduction in membership some

Collegiate Seminar - . do now (10 minutes) : take out a loose leaf and being writing down everything that you can

Collegiate Athletics - . what do i need to do &amp; is it for me?. collegiate athletics. take care of the first