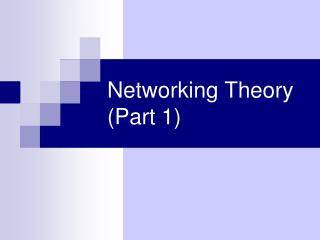 Networking Theory (part 2) - . internet architecture. the internet is a worldwide collection of smaller networks that

Perturbation Theory, part 1 - . march 18, 2014. just so you know. the fourier analysis/vocal tract exercise is due! plus:

Networking in Business: Part 1 - Many people have a backwards approach to networking. in this video, i give an