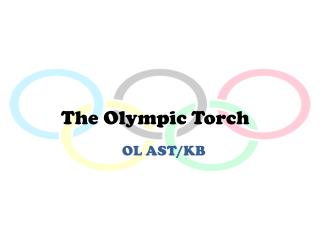 The Olympic Torch. OL AST/KB. The History of the Olympics. Olympic Games began over 2,700 years ago in Olympia, in southwest Greece. The Games were part of a religious festival. The Greek Olympics, thought to have begun in 776 BC, inspired the modern Olympic Games (begun in 1896)

Grab The Torch The LEAP initiative - Leap into the future grab the torch at fountain valley school june 10-15, 2012 a

The Singapore Olympic Dream - . olympic movement. to contribute in building a peaceful and better world by educating the

The London 2012 Olympic torch! - . this power point will tell you about the olympic torch history and the modern torch

TORCH - . a cherenkov based time of flight detector. maarten van dijk on behalf of the torch collaboration (cern,

All about the O lympic and P aralympic torch relay!! - . olympic

TORCH 101: What is TORCH? - . sarah brown- torch chair. contents. torch objectives overview of torch how to get started

The Olympic Games - . the olympic flag. five ring are joined together as a sign of friendship. the summer olympic games.

The Olympic Games - . bird's nest /beijing national stadium. competition. how much do you know about the olympic games?.