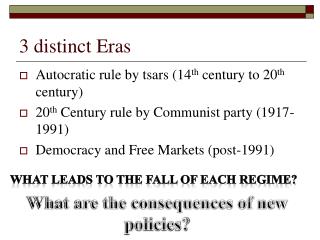 3 distinct Eras. Autocratic rule by tsars (14 th century to 20 th century) 20 th Century rule by Communist party (1917-1991) Democracy and Free Markets (post-1991). What leads to the fall of each regime?. What are the consequences of new policies?. Russia To Know. 3 Eras of Prehistoric Texas - . chapter 4. historians. historians divide the past into eras to easily identify changes in

Distinct items: - . given a stream , where , count the number of distinct items (so we are in the cash register model)