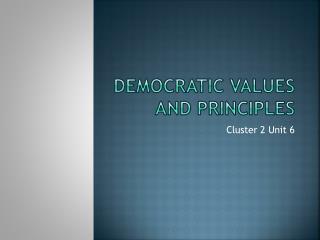 Democratic Values and Principles. Cluster 2 Unit 6. What is democracy?. Democracy is: A process People listen to one another People say what they think People make decisions together by accepting a vote by majority Taking people’s opinions into consideration. There is no democracy when: Core Democratic Values - . common good. citizens should work together for the good of all. the government should make

Principles and values - . beliefs. 1 ) e xpectancies (realistic or not); 2) understandings (accurate or not) about how

P4 Principles and values - Unit 9 p4: the role of the professional and the legislation, guidelines and policies which

Principles, Values and Key Competencies - How physical education and health are relevant to the new zealand curriculum in

PRINCIPLES AND STRATEGIES OF VALUES EDUCATION INSTRUCTION - . vanessa oyzon, m.a. college of education, university of the

CICs &amp; Co-operative Values and Principles - . who we are and what we do:. co-operatives uk is owned by the

Inter-American Program on Education for Democratic Values and Practices - . office of education and culture department of