How do you use plants? - PowerPoint PPT Presentation 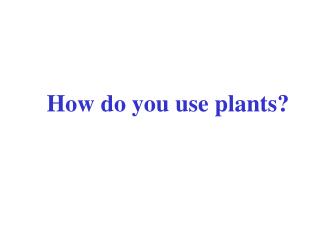 How do you use plants? How do you use plants?. Since plants are so familiar, we may overlook how vital they are to human life:. How you use plants : Food (& farming) Medicines Fossil Fuels & Fuels Building materials & conservation Aesthetics (ITS PRETTY- The light & dark side of Landscaping plants).

How do you use plants?

Plant Diversity - The evolution and classification of plants warm-up: write each question and answer for each. what do i

Plants - . outline. what are plants what a plant needs seeds roots stems leaves flowers diagram of a flower. what are

Plant Form and Function - . learning goal: how are plants structurally adapted for survival? concept 1: analyzing the

Plants - . autotrophs. plants all share some characteristics:. all are photosynthetic. all are multicellular. all are

The World of Plants - . by ljjt, (awesome). introduction. the united states is home to thousands of species of plants.

Chapter 2 - . energy from plants. lesson 1- what are plants’ characteristics?. plants are made of small building

Why do you think that plants such as these are essential for most life on Earth? - In what major way does the top pair

All about plants - . by damien. plants are living things. plants grow on mountain tops, in oceans, deserts, and snow

Enviroment - . environment. we should clean our house growing the plants we should not through out the carbidge. make our