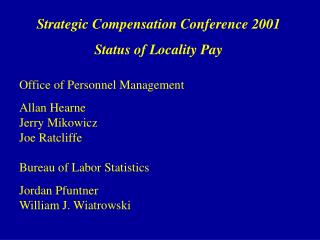 The U.S. Office of Personnel Management - . recruiting, retaining and honoring a world-class workforce to serve the

The World of Pay and Compensation Management - . jayendra rimal. introduction. it was standard to allocate 40% of revenue

The World of Pay and Compensation - . seventy percent (70%) of all jobs in the usa are in the service sector.

Strategic Compensation - . the challenge. to align the deployment of human capital with company strategy. environmental