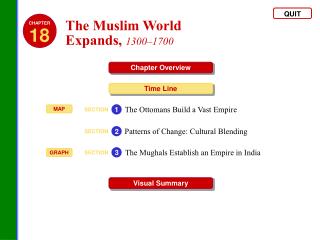 Islam - Muslims. can be born into a muslim family or community; can convert by confessing shahadah (not baptism, not

The Muslim World - . chapter 10 unit 3. sswh5 the student will trace the origins and expansion of the islamic world

European Challenges to the Muslim World - . rachel cornish. ferment in the muslim world. by the 1500s, there were three

The Muslim World - . sol standards essential questions. where did the islamic religion originate? where did it spread?

The Muslim Mindset - . after m ohammed. subsequent developments. conquest and culture islam spreads throughout most of

The Development of a Muslim Empire - . the first three caliphs: abu bakr, umar, and uthman. what do you see here? how

The Rise of the Muslim World - . part 2: the spread and split of islam. expansion and division. muslims were inspired to

10.2 Islam Expands - . in spite of internal conflicts, the muslims create a huge empire that includes land on three

NEXT - The muslim world, 600 – 1250. tolerance of other cultures and a focus on learning help muslim leaders build an

Islam Expands - . chapter 10 section 2. muhammad’s successors. muhammad did not name successor or how to choose one