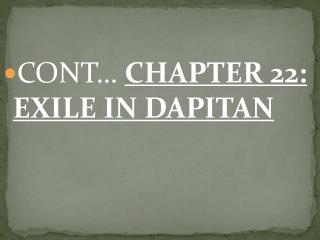 Ch. 3/3 “The Growth of Judaism” - . the jews called their time in babylon an exile because they were forced to live

Daniel – No Compromise Daniel Chapter 1 - . the book of daniel. who wrote it? daniel!. how we know that? jesus says so!

Chapter 9: The Remnant Making a Home after the Exile - . religion 9 april 2013 mrs. kenny. where are we in the story of

A Glimmer of Hope - . exile. he carried into exile to babylon the remnant, who escaped from the sword, and they became

Exile - . this is the time that the jews spent in babylon. . sabbath . the weekly day of worship and rest. . synagogues .

Conquest and Exile - . chapter 13 the fall of the south. after rehoboam. the north had fallen into the hands of the