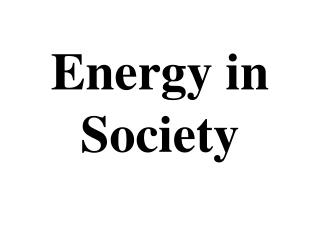 Chapter 4: Energy, Chemistry, and Society - . what do you think of when you hear the word. energy?. like the energy of a

Thermal Energy &amp; Society - . in this chapter we will explore ; the physical concepts of temperature , thermal

Energy and Society - . energetics of human societies. we are currently living off of stored energy capital of millions of