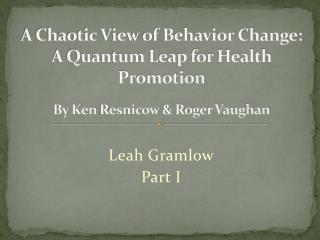 Leah Liberty - . going from childhood to adulthood can be hard, but with a little discipline and patients you’ll find

Leah Saunders - What is this pat information telling me about my own practice and my students?. leah saunders. webinar

Leah Fackrell - . “our greatest weakness lies in giving up. the most certain way to succeed is always to try just one

PART I - I - . overview. “ there is nothing permanent except change”. - heraclitus, a greek philosopher 500 bc.

Part I I I - Irrelevant topics in physics . part i i i. what is irrelevant?. questions the tools we use in physics so

Part I - . chapter three. heredity and environment. the genetic code from one cell to many from genotype to phenotype

Part I - . introduction to labview. what is programming?. a set of instructions that