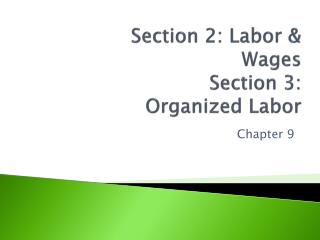 EMPLOYMENT, LABOR, AND WAGES - . chapter 8. warm up question: april 4th, 2017. have you ever convinced a person in

Big Business and Organized Labor - Factors that led the u.s. to be the leading industrial power by 1900. treasure house

Organized Labor - . why organized labor?. collective bargaining unions bargain for contracts on behalf of its members

Chapter 9: Labor Section 1 - Objectives. describe how trends in the labor force are tracked.analyze past and present

History: Organized Labor - . pose a question: what do you want to learn about this picture?. gather clues: what do you

WAGES in labor - . wages. the price of labor payments workers receive in return for work governed by the forces of supply

Big Business &amp; Organized Labor - . how did industrialization change the workplace and give rise to labor unions?

Labor and Wages - . in this lesson, students will be able to identify the impact of education on wages and the impact of

Chapter 9: Labor Section 3 - . in class assignment. create 2 columns: “wages go up” and “wages go down” under

Working with Organized Labor - 15. working with organized labor. challenges. why do employees join unions? what agencies

Organized Labor - . essential question what is a labor union and why has membership declined ?. ca standard(s) covered.

ORGANIZED LABOR - . working man labor is one of the 3 factors of production most people are employees (little control)