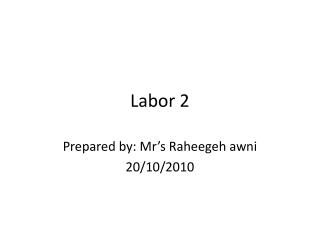 Labor 2. Prepared by: Mr’s Raheegeh awni 20/10/2010. Second Stage of Labor. This stage begins when cervical dilatation is complete and ends with fetal delivery. Unit 2 Career: Labor You Love - . step 2 your career and your financial future what you have learned action plan. your

Unit 2 Career: Labor You Love - . step 1: your career. objectives. in this unit you will learn: how career choices affect

Labor - . during labour, help women maintain control. factors that induce stress should be prevented, or at least

Labor - . this is the process by which products of conception (fetus, placenta, cord and membranes) are expelled from the

Labor - . the workers, or employees, of a company. management. people who are ‘in charge’ of a company – they make