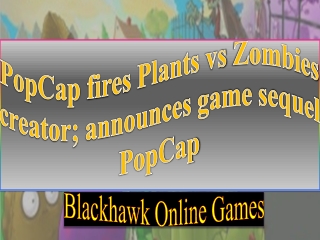 “The sequel to Plants vs. Zombies is expected to launch by late spring 2013, and will include a bevy of new features, settings, and situations, designed to delight the franchise’s tens of millions of fans around the world,” according to PopCap. However, it did not go into details about the platforms where it will be available. It was also unconfirmed if PopCap plans to make the sequel a separate game version or be an update to the current one. PopCap, now a division of EA has released the following statements from two of its game characters regarding the sequel’s release: “Spring is crullest curlie ungood time, and plantz grow dull roots. So, we are meating you for brainz at yore house. No worry to skedule schedlue plan… we’re freee anytime. We’ll find you.” “There was a time we relished a bracing, hearty blend of zombies, in the morning. But first, a brisk shower and some strategic pruning are required. Tomorrow is near!” On the other hand, PopCap offices are not in the mood to celebrate as it was announced on the same day that some of them are going to be laid off, which surprisingly includes the creator of their flagship game himself. Senior game designer George Fan, the brain behind the smash hit game is confirmed to be included in the job cuts in PopCap offices in Ireland and Seattle. PopCap asserts that reorganization is a must considering the fast-changing game market and that PopCap would do well to invest in new game platforms and expand its market further in Asia. Plants - . outline. what are plants what a plant needs seeds roots stems leaves flowers diagram of a flower. what are

A puzzle game with a sense of humor An onClick adventure featuring ninjas, zombies and cupcakes Simple design, original

Grammar - . (otherwise known as fun times with zombies.). they’re, their, there. they’re = they are their = belonging

The physical reductive explainability of phenomenal consciousness and the logical impossibility of zombies - . marco

Riley.s - . brazil wildfires. 1998 in romania . the fires. the fires took place on its savannahs, grassland and deciduous

Which soil is best for my plants? - . greenhouse. bellringer. learning target. evaluate whether a soil is suitable for

The First Video Game - By davon chambers. the first video game. who invented the game? . william alfred hignbotham is the

Zombies and World War Z - . wilfred doricent 1988 haiti. zombie as signifier they do their real cultural work in the

Parasites: “ZOMBIES” in NATURE - . understanding how some organisms take over other organisms for their survival.