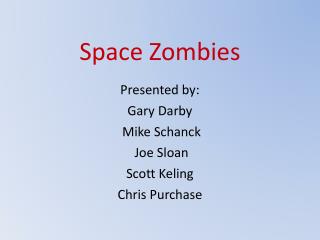 Zombies - . geoff huston apnic labs. what we did:. run an online advertisement with an embedded measurement script the

Zombies: - . an introduction to the undead. objective:. by the end of the fourth quarter, using zombies as a teaching

Zombies - . big 6. step 1: task definition. define your problem are you making an argument? are you simply reporting?

Zombies - . an apples production. how to stop from c atching the virus. what

When Zombies Attack! - . or, how to be prepared for most anything and live well in the meantime. some sobering stats. the

Zombies in America! - . an examination of the popularity of the zombie in american culture. by amy lazerte. consider the