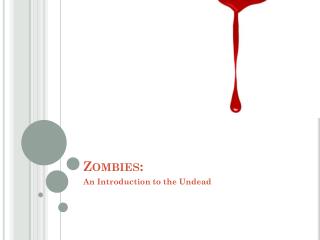 Zombies:. An Introduction to the Undead. Objective:. By the end of the fourth quarter, using zombies as a teaching medium, students will complete an interdisciplinary study and be able to describe key aspects of: Folklore & literature Structure and spreading of disease Binary voyeurism - . a decent overview. who are you. any experience with binary reversing ? debugging? exploitation ?

Zombies and World War Z - . wilfred doricent 1988 haiti. zombie as signifier they do their real cultural work in the

Binary voyeurism - . a decent overview. who are you. any experience with binary reversing ? debugging? exploitation ?

The Expository Essay - . or “how to write a how-to essay”. first, choose a topic and brainstorm. survive zombie

To Be or Not to Be: - Watch the video and learn about active vs passive voice with zombies!. http://

A puzzle game with a sense of humor An onClick adventure featuring ninjas, zombies and cupcakes Simple design, original

The Fight for the SERIAL COMMA - . or, how commas can save lives, reputations, and keep families intact during the zombie

Spoken English - . on your desk:. name tag notebook pen. are you sitting in the correct seat?. team points. vampires.

Biological Basis of Zombies - . fact vs. fiction. fiction zombies are dead rotting corpses that come back to life they