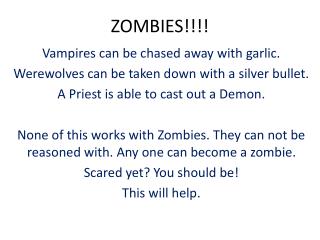 Vampires can be chased away with garlic. Werewolves can be taken down with a silver bullet. A Priest is able to cast out a Demon. None of this works with Zombies. They can not be reasoned with. Any one can become a zombie. Scared yet? You should be! This will help. ZOMBIES!!!! . Zombies - . geoff huston apnic labs. what we did:. run an online advertisement with an embedded measurement script the

Zombies Bodies without souls - . a corpse that has been raised from the grave and animated most closely related with

When Zombies Attack! - . or, how to be prepared for most anything and live well in the meantime. some sobering stats. the

Zombies: - . an introduction to the undead. objective:. by the end of the fourth quarter, using zombies as a teaching

Zombies in America! - . an examination of the popularity of the zombie in american culture. by amy lazerte. consider the

Zombies - . big 6. step 1: task definition. define your problem are you making an argument? are you simply reporting?