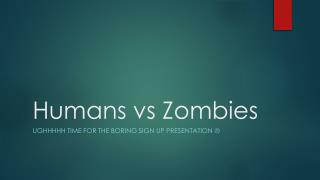 Humans vs Zombies. Ughhhhh time for the boring sign up presentation . This meeting registration thing. 6 steps: Show you this powerpoint Have you sign a liability waiver Sign up on our website Squads? Buy a bandana? Pick up hvz card on Monday. CHICOHVZ.COM.