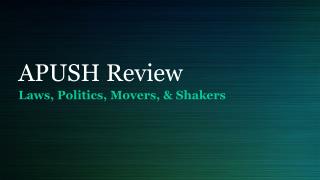 APUSH Review. Laws, Politics, Movers, & Shakers. Amendments. What does the 26 th Amendment do?. Give 18 year olds the vote. What Amendment gave women the right to vote?. 19th. What amendment abolished slavery?. 13th. What did the 14 th amendment do?. Citizenship for African-Americans.