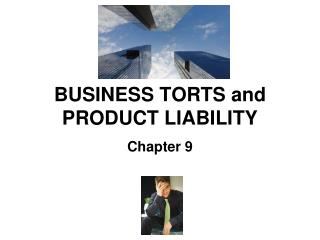 BUSINESS TORTS and PRODUCT LIABILITY. Chapter 9. Torts in the Business Setting. There is no such thing as a “business tort”. T his just means torts that concern businesses. Often cases with businesses are settled out of court. BUSINESS TORTS and PRODUCT LIABILITY - . chapter 7. torts in the business setting. there is no such thing as a

Chapter 9 Torts and Product Liability - . sources of tort law. for the most part, tort law is governed by state common

Torts: Negligence and Strict Liability - . when a wrong was not intended but creates liability nonetheless. obe 118,

Intentional Torts, Negligence, and Strict Liability - . section 5-2. what are the most common intentional torts?.

Business Law I Intentional Torts and Business Torts - . tort means “wrong”. a tort is a violation of a duty imposed

Strict Liability and Torts and Public Policy - . ms . weigl. what is strict liability?. exception to the requirement of

Business Law I Sales and Product Liability - . development of commercial law. as trade increased throughout history, the

Product Liability - . when goods cause injury, there is a question of product liability. there are three main issues