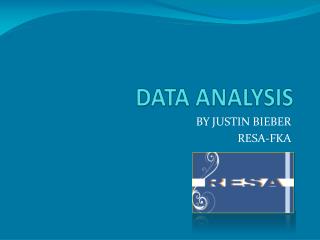 DATA ANALYSIS. BY JUSTIN BIEBER RESA-FKA. What is Data?. A collection of fact!!!. What is Data Analysis. Data analysis is about manipulating and presenting results Data need to be organised , summarised , and analysed in order to draw/infer conclusion Data Analysis - . dr. sampath jayarathna old dominion university. credit for some of the slides in this lecture goes to

Data Analysis - . overview. traditional database systems are tuned to many, small, simple queries. some applications use

Data Analysis - . basic problem. there is a population whose properties we are interested in and wish to quantify

Data Analysis - . or why i like to draw straight lines. engineers like lines. two parameters for a line m slope of the

Data Analysis - . based on the work of vicki bernhardt itf• january 27, 2009. data can help to. replace hunches with