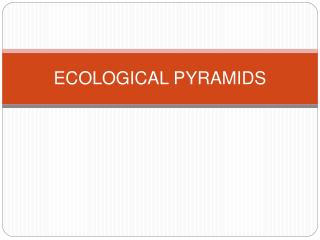 ECOLOGICAL PYRAMIDS. Ecological Pyramids. An ecological pyramid is a diagram that shows the relationship amounts of energy or matter contained within each trophic level in a food web or food chain.

Pyramids &amp; Tombs - . preparing for the afterlife. aim: why did the egyptians build pyramids and elaborate tombs?.

Daily Opener - . what was the rosetta stone and why was it so important for historians?. what do you know about the

The pyramids of giza - . by sarah fullenweider. location. located in el giza, egypt the pyramids were built from

Surface Area of Pyramids - . lesson 12.2. pyramids:. has only one base (polygon ). edges are not parallel but meet at a

Pyramids &amp; Tombs - . preparing for the afterlife. aim: why did the egyptians build pyramids and elaborate tombs?.

Ecological Pyramids and Biogeochemical cycles - . pyramid of energy (or productivity). pyramid of biomass. pyramids of

Sampling and Pyramids - . 15-463: rendering and image processing alexei efros. …with lots of slides from steve seitz.

Ecological Imperialism - . ecological imperialism. this is the story of how a few europeans…. hernan cortes. c.