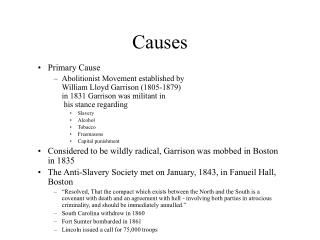 Causes. Primary Cause Abolitionist Movement established by William Lloyd Garrison (1805-1879) in 1831 Garrison was militant in his stance regarding Slavery Alcohol Tobacco Freemasons Capital punishment Considered to be wildly radical, Garrison was mobbed in Boston in 1835