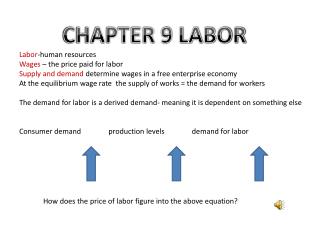 CHAPTER 9 LABOR. Labor -human resources Wages – the price paid for labor Supply and demand determine wages in a free enterprise economy At the equilibrium wage rate the supply of works = the demand for workers Chapter 9: Labor Section 1 - Objectives. describe how trends in the labor force are tracked.analyze past and present

Chapter 9: Labor Section 3 - . in class assignment. create 2 columns: “wages go up” and “wages go down” under

Chapter 9 Labor Market Discrimination - . god, what gorgeous staff i have. i just can’t understand those who have ugly

Chapter 3 Labor Demand - . the labor is worthy of his hire. —the gospel of st.luke. 3.1 the short-run labor demand.

Chapter 32 Labor Law - . the right of workers to form, join, and assist labor unions is a statutorily protected right in

Chapter 9 Human Resource Management, Motivation, and Labor-Management Relations - . you have 65.5 seconds to find 5