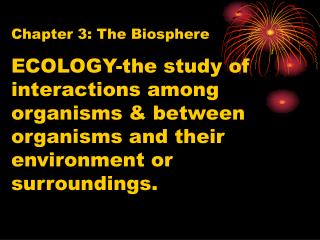 Chapter 3: The Biosphere ECOLOGY-the study of interactions among organisms & between organisms and their environment or surroundings. LEVELS OF ORGANIZATION: BIOSPHERE-the largest level…to include all living things 8 km above the Earth’s surface & 11 km below the surface of the ocean. BIOME An Introduction to Ecology and the Biosphere - . the scope of ecology abiotic factors of the biosphere aquatic and

An Introduction to Ecology and the Biosphere - . by: caitie , alex, kara, and garris. the scope of ecology. organisms are