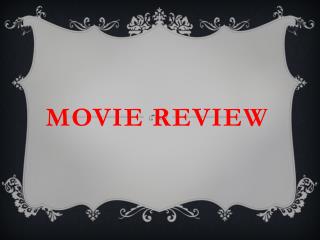 Movie Review . Catchy Introduction/Hook. The story Hunch Back of Notre Damn is a story of how discrimination could really affect ones life. It could lead to a huge destruction. We must not judge the person by the physical appearances. . Storyline: What was the story about?. Movie Review - . you are the movie critic. worksheet for gathering evidence for movie review. complete the worksheet

Movie Review - A movie review done by a group of members for the people to select the base of its worth. url :

U-Turn: Tamil- Movie Review - U-turn is a movie about deeds and its consequences. in short, whatever you do, will