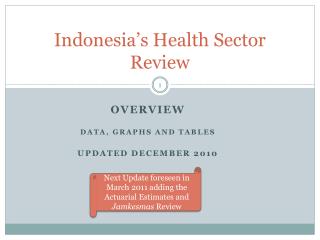 The Role of State Owned Banks in Indonesia - . global conference on the role of state-owned financial institutions:

PRESENTATION ON NATIONAL HEALTH INSURANCE POLICY FOR THE PORTFOLIO COMMITTEE OF HEALTH - . national department of health

THE HEALTH SECTOR RESPONSE TO THE HIV/AIDS EPIDEMIC 1985-2008 - . presentation to the technical review meeting for

Lessons Learned during the use of Global Investment Promotion Benchmarking in Indonesia - . march 28, 2011. greg a. elms

Prof. Agus Purwadianto - The role of government in encouraging a high standard of ethics in the healthcare sector :