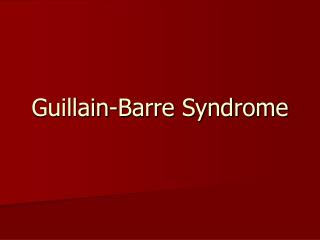 PARALYZED WITHOUT WARNING - A couple’s journey back from guillain-barré syndrome. paralyzed without warning. john

Guillain-Barre Syndrome (Polyneuritis) - . presented by: gari dee glaser. what is gbs?. a disorder in which the body’s

Guillain-Barr Syndrome - . guillain-barr syndrome is an autoimmune attack on the peripheral nerve myelin. the result is