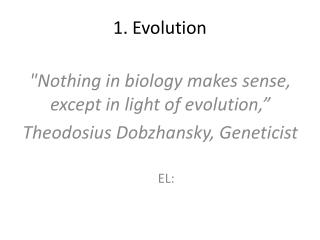 "Nothing in biology makes sense, except in light of evolution,” Theodosius Dobzhansky , Geneticist. 1. Evolution. EL:. Before we begin…. Spend the next ten minutes writing down how you think evolution works – i.e. how would you explain it to a non-biologist? 1. Evolution - . change over time. 1. define a species and give examples. 2. define a population and identify local

Evolution Part 1 - . 1. who is the naturalist credited for the evolution theory?. charles darwin. 2. what is the

Module 1: Evolution - . macroevolution. microevolution. change in the frequencies of genotypes in a population. the

CHAPTER 1: TQM EVOLUTION - . chapter objectives: at the end of the lesson the students will be able to:. be generate the

Evidence for evolution 1 - . bio3b. palaeontology. this involves the collection of evidence of past life or f ossils the

EVOLUTION 1 PRACTICE TEST - . question #1. there was a population of winged and non-winged creatures. one day, a

Big Idea 1: Evolution - . essential questions. what role does evolution play in the organization of living things? what

Evolution 1 Practice Test - . question #1. there was a population of winged and non-winged creatures. one day, a

Evidence for Evolution: 1) BIOGEOGRAPHY - . = the scientific study of the geographic distribution of organisms base don