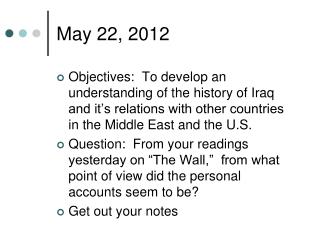 May 22, 2012. Objectives: To develop an understanding of the history of Iraq and it’s relations with other countries in the Middle East and the U.S. Question: From your readings yesterday on “The Wall,” from what point of view did the personal accounts seem to be? Get out your notes. 22-23 May 2012 | Riga, Latvia - Flagship project concept within the eu strategy for the baltic sea region

Jana Poljak Zagreb, 22 May 2012 - Preparation of national reform programmes in view of europe 2020 strategy and enhanced

Gothenburg, Sweden , 20-22 of May , 2012 - Ocean planning as a tool for blue growth and smart specialization - frederico

Agenda – May 22 - Reminder: awards night is this wednesday! i would be honored if you came. please come even if you