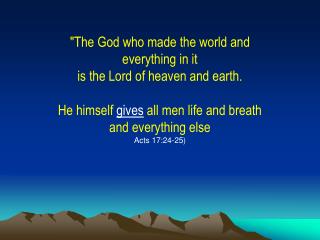 Lord, I lift - Your name on high, lord, i love to sing your praises. i’m so glad you’re in my life, i’m so glad

AP European history: Chapter 16 Toward a New Heaven and Earth - . the scientific revolution and the emergence of modern

Our God is a great big God - . he holds us in his hands. the lord’s prayer. our father in heaven (hand in air) hallowed

5 Ways Geographers think about the World - . space : geographers observe regularities across the earth and depict them on

Welcome to Earth and Moon Jeopardy! - . i’m your happenin’ host sal the scientist! today we will be reviewing the