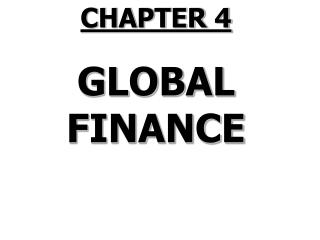 CHAPTER 4 GLOBAL FINANCE. Global Finance PRISMS. Are the benefits of Keynesian national financial deficits greater than the costs? Should FDI be used for political purposes? Who should benefit from a nation’s currency policy?.