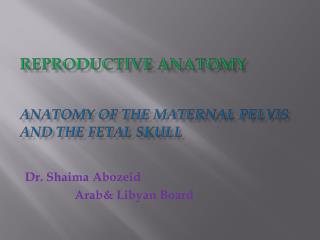 REPRODUCTIVE ANATOMY ANATOMY OF THE MATERNAL PELVIS AND THE FETAL SKULL REPRODUCTIVE ANATOMY ANATOMY OF THE MATERNAL PELVIS AND THE FETAL SKULL. Dr. Shaima Abozeid Arab& Libyan Board. Objective An understanding of the development and anatomy of the female genital tract is important in the practice of obstetrics and gynaecology.

REPRODUCTIVE ANATOMY ANATOMY OF THE MATERNAL PELVIS AND THE FETAL SKULL

Development of Reproductive Anatomy - . development of sex organs: overview all the same, until week 7 – then

ANATOMY OF THE PELVIS - . objectives. at the end of the lecture, students should be able to: describe the anatomy of the

Anatomy of the Male Reproductive System - . ansc 5063. testicle begins development in mesonephric region of the embryo

Anatomy of The Reproductive System - . 8 th grade by leah turner, jennifer golay and kyle boling . what is reproduction?.

Anatomy of the Male Reproductive System - . scrotum. pouch of skin that hangs at root of penis and contains the testes