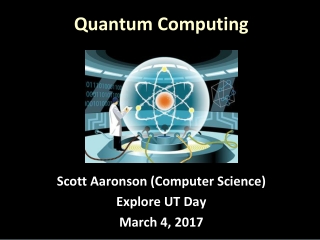 Quantum vs. DNA Computing - . in search for new computing methods. petros gkourasas pgkouras@uwo.ca. what is this all

Need for Quantum Technologies - . “ quantum physics holds the key to the further advance of computing in the

Computing with Quantum Knots - . a machine based on bizarre particles called anyons that represents a calculation as a

Introduction to Quantum Computation - . andris ambainis university of latvia. what is quantum computation?. new model of