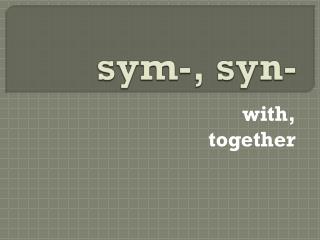 sym-, syn -. with, together. willisms.com. In agreement or favorably inclined = sympathetic. synonymsforhappy.com. The same or similar in meaning = synonymous . A putting together of parts to form a whole= synthesis. SYN-OPTIC - . three gospels. luke. matthew. mark. “look-alike” and quite similar in: as against john:. content:

Symmetric Group Sym(n) - . as we know a permutation p is a bijective mapping of a set a onto itself: p : a  a.

BIOLOGY WORD PARTS - . learning greek and latin word parts can be a dirty job, but they can make your life easier!. today

“Fundamentally alike in all unimportant respects?” - . is government like business? can the public sector be run like

Greek and Latin roots, suffixes, and prefixes - . coronado freshmen. unit 1. a, an without, not anonymous, apathy,