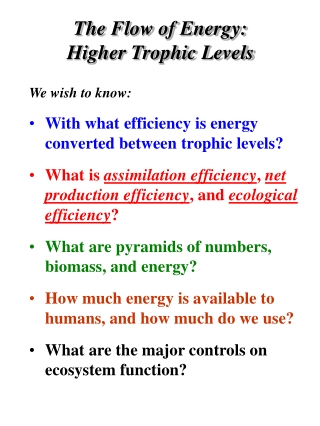 The Flow of Energy: Higher Trophic Levels. We wish to know: With what efficiency is energy converted between trophic levels? What is assimilation efficiency , net production efficiency , and ecological efficiency ? What are pyramids of numbers, biomass, and energy? Trophic* Relationships - . this way to define organisms within an ecosystem is based, simply put, on what they eat and

Ecosystem Ecology - . ecosystem ecology. interaction among all communities and the abiotic and biotic factors chemical

Chapter 54 Ecosystems - . ecosystem. all the organisms and abiotic factors in a community. ecosystem studies. 1. energy

Trophic Level - . a way of categorizing living organisms according to how they gain their energy the first trophic level

Let’s Eat!! - . trophic levels. u.s.g.s. what do the first and second laws of thermodynamics tell us?. first law:

Energy in a Community - . food chain : who eats who? food web : all the food chains in an ecosystem energy/biomass

It’s a bug eat bug world! - . how to use biological control instead of pesticides in your garden. l. bateman. trophic

ENERGY FLOW IN ECOSYSTEM - . how does energy flow in an ecosystem? what is an energy pyramid? what is a trophic level?.

Food webs and trophic cascades in lakes - . how to represent trophic relationships? (paine 1980). connectedness based on