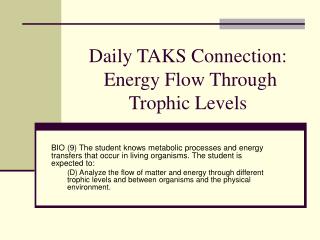 Energy Flow and Trophic Structure - Energy capture. heterotrophs: obtain energy from organic sources or from other

Daily TAKS Connection: Changes in DNA - . bio(6): the student knows that the structures and functions of nucleic acids in

Daily TAKS Connection: Safe Practices - . objective 1 bio/ipc(1): the student, for at least 40% of the instructional

Daily TAKS Connection: Plant Adaptations - . objective 3 bio (13): the student knows the significance of plants in the

Trophic Levels - . gibbons and castillo. trophic levels. definition: feeding level of one or more population in a food