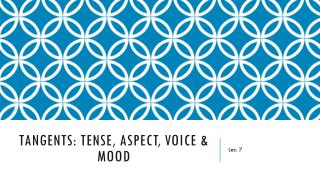 Tense, Voice, and Mood - . displaying maturity in the study of god’s word. truth must always be upheld. we are

Mood &amp; Tone - . mood is the feeling that a story creates in the reader. tone is a author’s attitude toward the

Conditionals practice - . getting familiar with the forms. si ratio ducit , felix es. tense and mood of verb in protasis

El Subjuntivo - . no es tan complicado …. en español. the subjuntivo is not a tense; rather, it is a mood . tense

The Conditional Tense - . using one of the easiest tenses to siphon points from on any free response question in french.

4e: Tangents (Section 10-5) - . a tangent is a line in the same plane as a circle that intersects the circle in exactly

EL SUBJUNTIVO - . the subjunctive is not a tense; rather, it is a mood . tense refers to when an action takes place

VOICE: NOT A TENSE AT ALL - . voice refers to whether or not the subject is actually performing the action described by

Tone &amp; Mood - . stop!. tone. when we read we hear the speaker’s voice. it’s the voice that conveys the tone