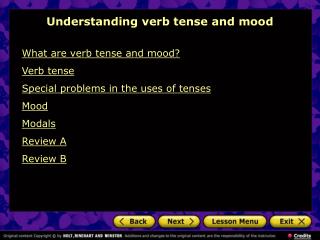 Shifts in Mood - . nec facet center. introduction. shifts in mood are often closely related to shifts in tense. both

Objective : To be able to identify and translate imperfect tense verbs - . x/xxii/mmxii. do now : take out your completed

Verb Tenses - . how to distinguish different verb tenses when tutoring. why the topic?. during the tutoring session, i

Lesson 3 Focus Point: Past verb tense practice - . dialogue. han is a teacher who is applying for a new job as a