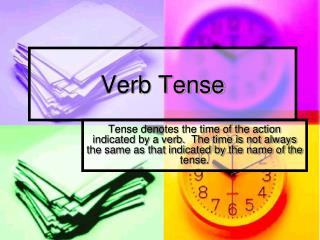 Verb Tense. Tense denotes the time of the action indicated by a verb. The time is not always the same as that indicated by the name of the tense. Verb Tenses. Present. Past. Future. Present Perfect. Past Perfect. Future Perfect. 6 Types. Past Tense. 1. any system of principles or beliefs - 2. the written body of teachings of a religious group that are generally

Infinitives and Infinitive Phrases - . an infinitive is formed from the word “to” together with the base form

Chapter 4 - . verbs. part 1. verb. a word used to express an action, condition, or a state of being. action verb. tells

Choosing the Correct Verb Tense: Past Tenses - . choosing the correct past tense is tricky, too!. how do you choose the