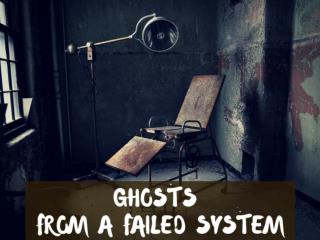 Ghosts from a failed system Westborough State Hospital, formerly known as the Westborough Insane Hospital, was built in the 1800s on hope and compassion. But with little scientific knowledge of mental illness, institutions like Westborough eventually became wretched warehouses. Civil rights activists, disability rights lawyers and politicians made it their mission to end the harsh restrictions imposed on people with mental illness, and the remedy was to close institutions like Westborough, which was shuttered in 2010. As part of the Spotlight team report on mental illness, Boston Globe photographer Suzanne Kreiter toured the abandoned hospital. “I know that technically these photographs have no people in them,” Kreiter says, “but they’re all right there. All these images contain the ghosts of the people who need our help the most.”

Ghosts from a failed system

The Muscular System - . objective:. the student will become familiar with the structure and function of the muscular

The Body Systems - . the immune system. what is a system?. a group of tissues (organs) that work together to do a certain

The Integumentary System - . the integumentary system. the skin is the body’s largest organ. each square inch of human